“Bite It” & “Throwing Shapes” are the latest works of art released by the artist currently known as Soul Intent (Alex Judd to those ladies lucky enough to get close enough). Follow the STORE link to purchase.

We decided, its time for a little chat.

“TELL US A BIT ABOUT HOW YOU DISCOVERED MUSIC AND WHY DID IT LEAD TO YOU BECOMING AN ARTIST?”

Around 93/94 I started hearing the stuff coming out of my brothers room. He’s 18 months older than me and got into music first. He was buying jungle, rave and ambient techno CDs Jungle Mania, The Prodigy, Biosphere, Routes From The Jungle etc.

Around the same time mates at school where bringing it tapes from Raves like Dreamscape and Helter Skelter and it was the first time I heard recordings from a rave, with MC’s and the whistle posse all recorded along with the music. The atmosphere sounded incredible and it was at this point I started saving for some decks.

Fast forward to around 2003 and I’m living in Nottingham finishing my degree. I was DJ’ing regularly around the midlands for Deontate, Komination Funk, and Interface but only able to get warm up sets. I was told to expect this unless I started writing tunes which was the best way of working my way up the line-up.

I’d been messing around with Propellerheads Reason for a few years but just dicking around and not really knowing what I was doing. I hooked up with a few local guys and started to learn more about working with Cubase. Then in 2005 seven of us, basically the Komination Funk crew started Brutal Recordings. Brutal was us working on tunes together under the alias Dataset. The stuff was pretty heavy tech but I managed to get a bit of a Full Cycle roller on the second release. Not long after the project started to run out of steam but I was determined to get to a position where I could produce tracks on my own.

So a couple of years later I reached a point where I was confident enough to start sending some demos off to labels and Radio 1 DJs. Mary Anne Hobbs contacted me sayings she was going to play ‘Jus Vibe’ on her show and I lost my mind. That was a big moment and the tracking actually states DJ Lynkx which was my DJ name at the time.

Shortly after Dan B who owns Blindside Recordings contacted me wanting to sign but I needed to come up with a new name as Lynx had just blown up with Mariachi on Creative Source and people were starting to confuse us. So I quickly came up with Soul Intent which I liked because it kinda has a double meaning….plus according to Discogs no one had ever used the alias before. 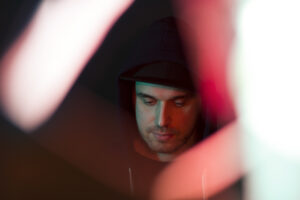 “YOU RUN THREE SUCCESSFUL LABELS, LOSSLESS MUSIC, DOPE PLATES AND EXKURSIONS, TELL US A BIT ABOUT THESE AND WHY YOU STARTED THEM.”

Like a lot of producers I found myself in a situation where I had a few tracks which had been signed but didn’t get released for various reasons. I felt some of the tracks were too good to just have hidden away on my hard drive plus people were still asking about them so it felt like now was as good a time as ever to set-up my own label.

Lossless Music was the original label, and the logo was designed by Small Kid who was part of Nottingham’s Detonate crew. Lossless allowed me to get older tracks like Cowboy Town and Studio Pressure finally out there. Then in 2016 I had a few rave/jungle vibes tracked which got a great reaction when I sent them around and they formed the first Dope Plates release.

I’d always incorporated rave and jungle into my tracks and also loved the graffiti style logos from Suburban Base, Moving Shadow and DeeJay. I wanted to get a cool logo done as much as I wanted to actually start the label if I’m honest. I managed to track Artjazz from Genaside II down. He did all their sleeve artwork and he was up for doing a logo, which he smashed out the park.

I also had some tracks pencilled for Samurai but again for various reasons plans fell through and those formed the first Exkursions release. Exkursions was more of a outlet for leftfield stuff.

Having these three labels might seem like overkill but they allow me to have outlets for the different styles of music I write.

Over the years people started sending me demos and even though the labels really so I had an outlet for myself, some of the music was too good to let it slip through my fingers.

“THIS IS YOUR THIRD RELEASE ON COMMERCIAL SUICIDE. DO YOU THINK THERES ANYTHING PARTICULARLY DIFFERENT ABOUT THOSE RELEASES COMPARED TO ANY OTHERS?”

In style maybe not, I like the same kind of vibes and styles now as I did when I started working with the label but I’d like to think the production is better. I love a roller and Klute obviously does too, so thankfully I’m still making music that fits the label and I’m very proud to be able to say I have 3 releases on one of my favourite labels. I remember getting Galaxian on white label from Selectadisc in Nottingham in my first year of uni. For ages I didn’t even know the track name, it just had ‘Klute’ scribbled on the label.
Maybe I shouldn’t admit this in an interview for this label but I wasn’t aware of Klute before this and only discovered his Certificate 18 work later on. Klute and Commercial Suicide always stood out to me for putting out music that had a slightly different edge to all the other music at the time – still does.
Klute’s also a brilliant DJ and two of my favourite sets (that I remember!) are him at Deonation at the Marcus Garvey and a small gig at Moog, both in Nottingham during my student days. So it’s a massive buzz to be working with him now….err am I coming across as too fan boy??!

“TELL US A COUPLE OF YOUR FAV STUDIO TOYS.”

My girlfriend was telling me recently how much money she’s saved during lockdown but being a bit of a gear addict I’ve been making ‘investments’ instead.

I love my Dave Smith OB-6 and Prophet 12 synths. I also bought a ASM Hydrasynth at Christmas which is very unique synth and brilliant for sound design. I recently bought a dual valve distortion pedal off a guy on eBay. This guy makes them himself and it’s ace for dirtying up bass and synth lines. Looks really cool with the valves sticking out the top.

There’s also some really good software around. I’m a fan big of Ohm Boyz, Spectrasonics, Fab Filter, and Vahalla plugins which all feature regularly in my productions.
I also enjoy using my hardware to put together sample packs when I’m finding creatively lacking. You can never have enough samples so it’s never time wasted. Infact I’d recommend a sampling session for anyone struggling with writers block, maybe just don’t be too obvious.

It’s 4:41pm, it says so on the heating control opposite where I’m sat. I’ve got about 12 watches but my wrists are naked today.

I’m writing this while watching ‘Do The Right Thing’ for the first time. I saw Spike Lee in London before lockdown…he was wearing some sick Nikes. True story.

Thank you all for making it this far. As a reward for your perseverance and resilience heres a very special “Commercial Suicide” mix by Soul Intent himself. Big up.